I.           Overview
In May 2016, LearningRx Franchise Corporation (“LearningRx”) settled an advertising investigation by the Federal Trade Commission (FTC), as part of an ongoing review by the FTC of marketing practices within the exciting, innovative, and highly promising new field of cognitive (“brain”) training. The FTC inquiry was the first and only time in the 15-year history of LearningRx that its business practices had been questioned by any regulatory agency, federal, state, or local. 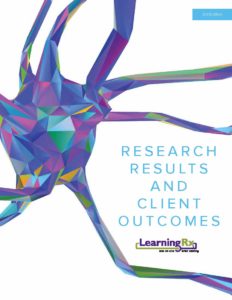 Nevertheless, while their studies show that their advertising claims satisfy the FTC’s traditional substantiation standard of “competent and reliable scientific evidence,” LearningRx made the pragmatic decision to settle its differences with the FTC, without any admission of liability or wrongdoing. After weighing the costs of time and energy to continue to defend their claims, they chose instead to focus their attention on conducting new research and studies, including several randomized control trials that are underway with major universities and independent researchers. LearningRx is highly confident that its future advertising will meet all legal standards of truthfulness, as it has in the past.